Why is the Quranic Text Problematic? Muhammad’s Message between Apocalypse and Empire 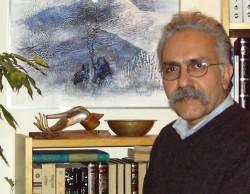 The Center for Religious Studies

in cooperation with the

Why is the Quranic Text Problematic?

Muhammad’s Message between Apocalypse and Empire

Abstract: The Quranic text is problematic. Very often, it is desultory, fragmentary, without any narrative structure. Its stories are divided into small pieces and scattered throughout the corpus. Why? The Quran presents itself as the continuation of the Torah and the Gospels, but contrary to these Scriptures, it says almost nothing about its central characters, Muḥammad and his contemporaries. Despite its very strong apocalyptic dimension, the Quran says nothing about the important figure of the Messiah either. Why? These questions preoccupied very early Muslim thinkers, and since the 19th century, Orientalists tried to find the reasons for its enigmatic data. I propose, in my lecture, a hypothesis considering several inseparable elements: first, the civil wars of the beginnings of Islam during which the Quran was elaborated; secondly, the apocalyptic and messianic dimensions that form the basis of Muḥammad's message and which the political powers of the first centuries of Islam tried to conceal; and finally, the fact that the figure of ‘Ali and his followers seem to occupy a central place in these events.

Mohammad Ali Amir-Moezzi was born in Tehran, Iran in 1956. He studied mainly at the National Institut of Oriental Languages in Paris, at the Sorbonne, and at the École Pratique des Hautes Études. He received his Ph.D. in Arabic and Islamic Studies in 1991. Since 1994, he is professor at the École Pratique des Hautes Études, where he holds the chair of Classical Islamology. Before him, this chair was occupied by Louis Massignon, Henry Corbin and Daniel Gimaret. Amir-Moezzi’s fields of research are Shi’i thought, the beginnings of Islam, the history of the Quran, and Persian classical literature. He is the author of twenty monographs and collective books and nearly 200 articles. Among his recent books translated into English are The Spirituality of Shi’i Islam: Beliefs and Practices (London-New York: I.B.Tauris, 2012) and The Silent Qur’an and the Speaking Qur’an: Scriptural Sources of Islam between History and Fervor (New York: Columbia University Press, 2016).