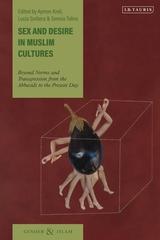 The Gender and Islam Series is devoted to the study of gender, sex and sexuality in Muslim-majority societies and contexts. Featuring original approaches to the diverse cultural, social and political dimensions of the topic, the series is novel in moving beyond the Islamic world to include other religious traditions, regions and spaces where Islam is an influencing factor.

Spanning the early Islamic centuries to the present time, the series analyses a broad variety of social, political, religious, literary and scholarly source material. It includes a focus on gender and representation based on the examination of various textual as well as visual sources. These range from Islamic foundational texts and later religious and literary discourses, to art and the arts, to politics and social movements, past and present.

The series editors encourage contributions from different disciplinary backgrounds to stimulate new and cutting-edge debates on gender, sex and sexuality across historical, linguistic and geographic boundaries.

Professor Nadia Al-Bagdadi participates in the series as both editor and contributer to this exciting new series.