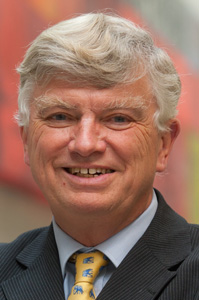 cordially invite you to

ABSTRACT | When young children first begin to ask 'why?' they embark on a journey with no final destination. The need to make sense of the world as a whole is an ultimate curiosity that lies at the root of all human religions. It has, in many cultures, shaped and motivated a more down to earth scientific interest in the physical world, which could therefore be described as penultimate curiosity. These two manifestations of curiosity have a history of connection that goes back deep into the human past. Tracing that history all the way from cave painting to quantum physics, this book (a collaboration between a painter and a physical scientist that uses illustrations throughout the narrative) sets out to explain the nature of the long entanglement between religion and science: the ultimate and the penultimate curiosity.

BIO | Andrew Briggs was elected to be the first holder of the newly created Chair in Nanomaterials at the University of Oxford. He has published over 575 papers and articles, the majority in internationally reviewed scholarly journals. After studying physics at Oxford he gained a PhD at the CavendishLaboratory in Cambridge, followed by a degree in Theology, winning the chase Prize for Greek. In 1980 he returned to Oxford, where he has been successively Royal Society Research Fellow, University Lecturer, Reader, and Professor, and Director of the UK Interdisciplinary Research Collaboration in Quantum Information Processing. His scientific curiosity focuses on materials and techniques for quantum superposition and entanglement.