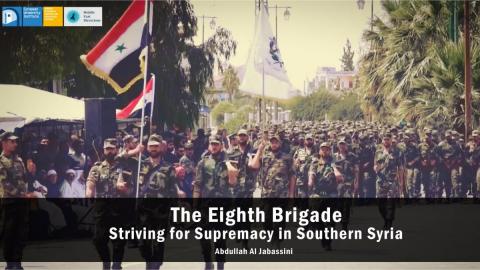 In June 2018, the Syrian regime forces backed by Russia launched a military offensive that aimed at terminating rebel rule and restoring control over southern Syria. By August 2018, Daraa’s rebel organisations were pushed to surrender under a “patchwork” strategy, including Russian-led negotiations between regime and opposition figures, and the Syrian regime’s use of armed force. The two fundamentally divergent approaches have demarcated three main zones in which the regime’s authority and thus the roles former rebels come to play in the post-rebellion period vary significantly.

In eastern Daraa, Russia established the Eighth Brigade, a sub-division of the Fifth Corps, and entrusted Ahmad al-Oda, a former rebel leader, with its command. By incorporating former rebels in the Eighth Brigade’s ranks, Russia, in fact, intended to establish a local armed actor characterised by a wide margin of manoeuvre to handle local security affairs and inflict acceptable and monitored smallscale violence to limit the regime’s authority and to keep Iranian influence at bay, thereby limiting status quo violations.

For more than two years, the Eighth Brigade has limited the regime’s authority, served as a bulwark against Iranian expansion, intervened to defuse tensions, and mediated to prevent wide-scale regimeled military offensives against several localities, all of which are Russia’s top priorities to maintain the status quo in the south. Nevertheless, the Eighth Brigade has been mired in struggles to overcome and mitigate top four interrelated challenges. First, the absence of official recognition by the Syrian Ministry of Defence. Second, the ambitions of Iran and its proxies in southern Syria. Third, the intermittent cyclical patterns of retaliations with local armed groups in neighbouring province of Sweida. Fourth, the ongoing rivalries among former rebel leaders.