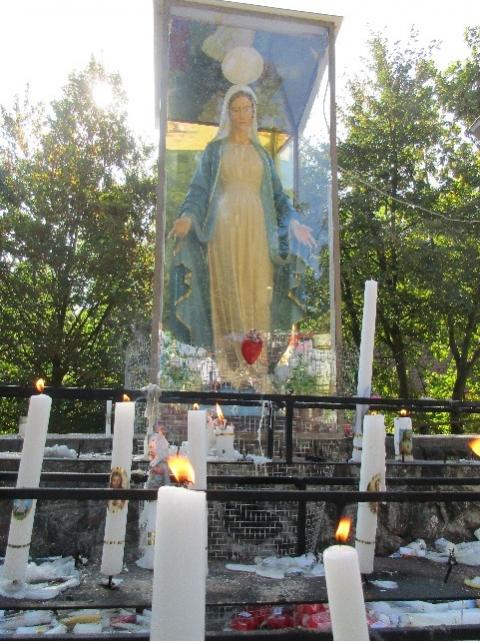 On Sunday, the 9th of September in 2018, CEU’s Roma Studies and Religious Studies students and staff bundled into a bus parked by the Danube early in the morning and set out for a day trip to Csatka.

Located at the eastern edge of Bakony, roughly an hour and a half’s drive from Budapest, the village of Csatka sits placidly among the rolling hills of the Transdanubian highlands. A tiny settlement with a population of just over two hundred people, its most interesting feature is a church complex nestled in a large grove of trees approximately two kilometers out of town, out of the range of public transportation. The Chapel of Mercy (HU: Irgalmasság Anyjáról), built in 1862, sits in a plot of low land over the ruins of a 14th century Pauline monastery. It houses a miraculous statue of the Virgin Mary and a healing well (HU: Csatkai szentkút) known for its efficacy against foot pain and paralysis. A smaller stand-alone church, built by Roma pilgrims, sits to the left of the chapel on higher ground. An open-air church sprawls out before the entrance to the chapel, with the altar ensconced under a standalone awning topped by an iron sculpture of the Holy Crown of Hungary. On the right of the altar, a smaller statue of the Virgin overlooks candles from within a glass display case; the miraculous well stands beyond the pews, at the opposite end of the church nave.

What makes this holy site so interesting in September, however, is the Szent Szűz búcsú, or the Holy Virgin Annual Pilgrimage, which is celebrated at the Csatka chapel on September 8th and 9th. The chapel, guarded over centuries by a succession of eleven hermits (today a government-appointed caretaker), sees droves of pilgrims visit its healing fountain on this weekend in the autumn, when it becomes a traditional site of celebration for the Roma people and local Hungarian villagers. Every year, the Roma pilgrims hold a celebration and gift the statue of the Virgin with new clothing on Saturday night, and on Sunday the regional bishop delivers a sermon to local congregants. 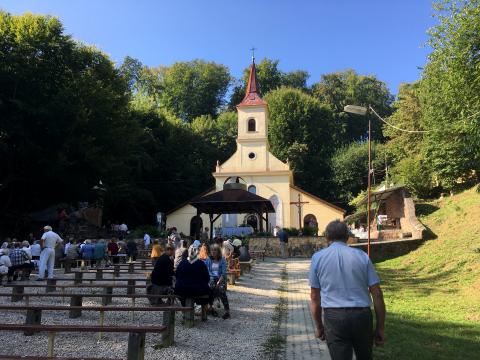 We missed the celebration on Saturday night, arriving Sunday morning to the remains of what looked like a great party scattered across the grassy field in front of the woods. Our bus pulled up alongside a neat row of other coaches in the middle of a random field, around which elderly Hungarian grandmothers were gathering with laurels and banners; as we started off towards the grove, they jumped vigorously into song and began to march ahead of us. Over fifty stalls selling religious paraphernalia, including rosaries, prayer cards, and– memorably– light-up icons of Jesus and the Virgin, bordered the tree-lined path to the chapel. We descended into the valley to hear a fairly conservative morning sermon, baking in the rising noontime heat, then left for lunch in a nearby town. 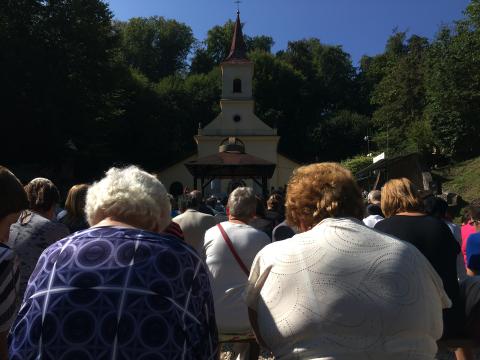 Our group returned in the afternoon, hoping to get an interview with the bishop. We missed the bishop, but the remaining congregants produced for us caretaker of the chapel instead, who was more than happy to deliver a history of the Holy Well and the Roma celebration. The history of the Holy Well is available online on various Hungarian websites, notably in an article by János Weisz (published by the Roman Catholic Parish of Csatka in 1999), but the caretaker’s explanation of how the Roma chapel came to be located in Csatka doesn’t seem to be recorded anywhere.

We all took seats under the altar awning. At some point, his account drew an audience from the Roma faithful remaining at the chapel, who happened to overhear him as they passed by; they stood at the legs of the awning, laughing with the caretaker’s jokes and listening with us to the chapel’s history. 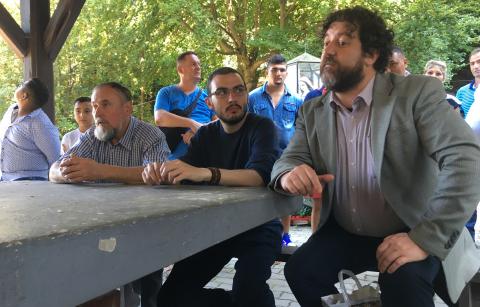 The Roma people, he told us, made a pilgrimage to Rome in 2003, where Pope John Paul II blessed a wooden crucifixion piece by a Roma craftsman. The figure of Jesus on the cross was modelled off of a Roma man, and the cross bore Romani script calling for God to bless the Roma peoples. They selected Csatka as the location for this cross, because of its position on the Marian pilgrimage road, and built a chapel separate from the main 1862 building. The chapel was completed in 2006, and to the present day the cross has been blessed by three popes. When the Roma have special civic meetings, they bring the cross with them. 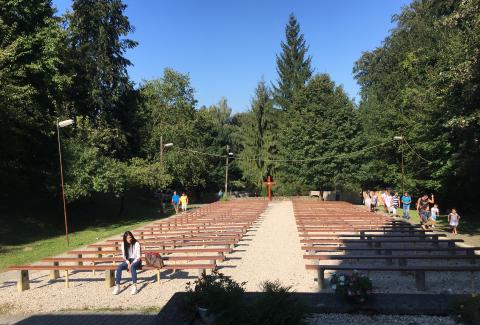 Afterwards, he offered to show us the outfits that the Roma people had made and gifted to the state of the Virgin within. Leading us into a small room behind the statue, stuffed to the edges with taffeta, gauze, and beadwork dresses, he pulled out a few highlights– the most recent peach silk dress; a black dress with intricate embroidered gold medallions; and a dress that had been delivered, he said excitedly, by a devout Roma seamstress from Toronto. The seamstress, he told us, wishing to make a dress but dissatisfied with the quality of a photocopy she was given, took one of the Virgin’s dresses as a model back to Toronto; she returned it the next year with the addition of her own piece, a robin’s-egg-blue crepe-and-chiffon gown. He dressed the statue himself, he said, as the responsibility to give her outfit some variety fell to him. 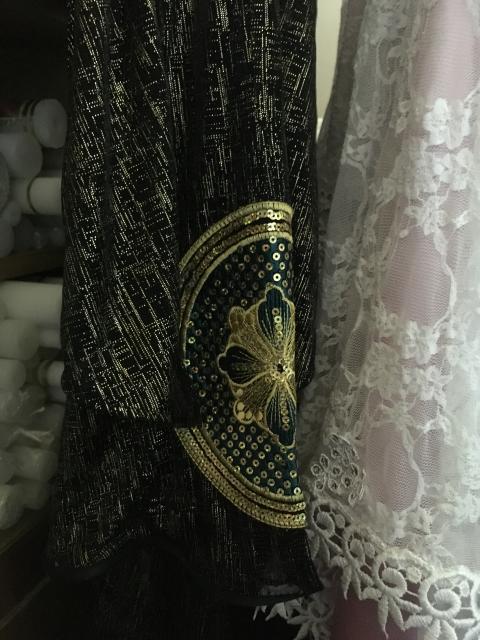 Finally, he led us to the Roma chapel itself, the interior brimming with flowers and decorated with multiple pictures documenting the journey of the cross to Pope John Paul II. A larger-than-life image of the pope, draped on the chapel wall, smiled at us from behind the wooden cross. 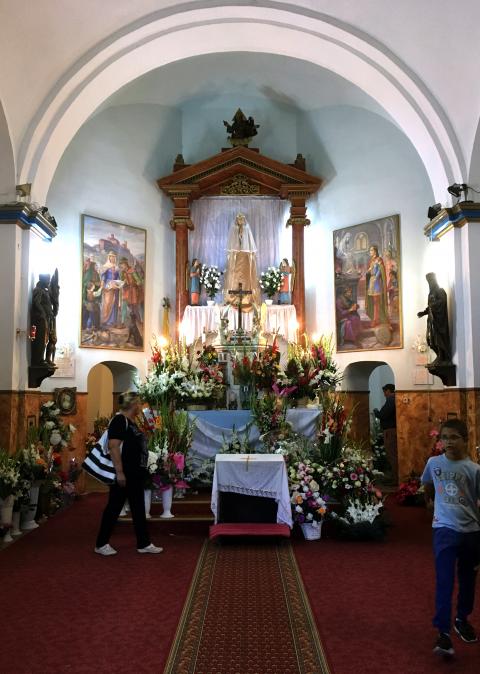 With the sun sinking over the hills, we thanked the caretaker– who, incidentally, added a few comments against the local clergy, with reference to Freemason interference– and trudged back up the hill to the bus. Most of the Hungarian congregation had left, but a few groups of Roma pilgrims were still packing up their canopies and benches.

We napped on the bumpy ride back through the Hungarian countryside and, in the evening, said our goodbyes in the Metro lamplight, memories of open grassland, Pope-blessed crosses, and organza gowns fresh in our minds.