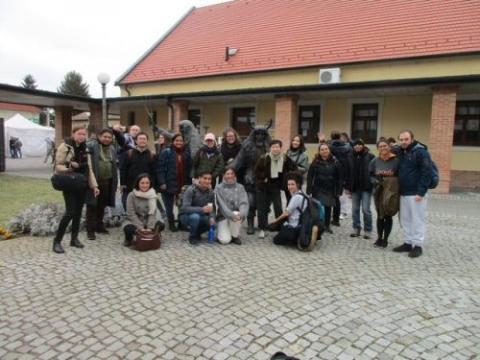 From the Blog by CEU International Relations Department and ACRS student, Talia Dunyak

This past Sunday, I was privileged enough to attend the festival of Busójárás in  Mohács, Hungary. Along with my International Relations MA at CEU, I am also pursuing an Advanced Certificate in Religious Studies. This trip was sponsored by the CEU Religious Studies Program, and it was honestly one of my highlights of studying at CEU, at least so far.

Being only to speak limited Hungarian has definitely been a hindrance when trying to travel around Hungary. So when I found out that we were going as a group to Mohacs, I was super excited to go. The Religious Studies Program is also one of the inter-disciplinary programs at CEU, meaning that on this trip, I would get to spend time with some of my friends who aren’t in every single one of my classes. So bright and early on Sunday morning, we piled in to the coach and headed south to the small border town of Mohacs.

Busójárás is primarily celebrated by the Šokci, the ethnic Croatian minority which resides in  and around Mohács. The festival is similar to other Karneval/Carnival festivals throughout Europe, and in some ways reminded me of the Funken I attended last year in Vorarlberg, both being festivals which involve copious amounts of fire and partially celebrate the end of winter. As many of my Austrian friends pointed out, the Busos in some ways resemble the Krampus and Perchten of the Alps, with their furry bodies and scary masks.

However, the Busójárás celebration in Mohacs claims its roots in the Battle of Mohacs, when the Šokci dressed in fearsome masks to scare off the invading Ottoman forces. Attending this event with such an interdisciplinary group, of course many were excited to visit the site of this battle from 1526, in addition to seeing the festival.

One of my favorite parts of the festival was wandering around the set-up area for the  Busó parade. Somehow, Andy, Mijat, Lili and I ended up kind of in the behind the scenes set up area for the parade. Here we watched the young  Busós take off their masks, drink beers with friends and take selfies with their buddies, while others were still putting the final touches on their costumes. To see the intersection of this tradition and modernity was particularly interesting to see right before the large  Busó parade began.

After the parade the Busós head to the Danube to throw a coffin into the river, representing the death of winter. After the coffin is lowered in, the Busós are set free on the town to cause merriment and chaos–mostly by drinking, chasing women and dancing. Walking through the town, the girls in our group were danced with, chased a little and definitely a part of the festival. To finish the evening off, there is a huge bonfire in the center of town, where an effigy of winter is burned.

As the effigy burned in the great bonfire, we participated in the general chaos and merriment of the situation, dancing and joyfully watching the Busos have fun with each other and the crowd. The day ended with us all grouping up to walk away from the bonfire and back to our bus home to Budapest, but even as we walked away, you could almost hear the clang of the Busós’ cowbells in the distance.

To read more from Talia's Travel Blog, please go to the link provided below!